On a frenetic, nerve-shredding night at Anfield, Liverpool completed one of the great Champions League comebacks to knock out Barcelona and reach a second consecutive final.

Trailing 3-0 from the first leg and without two of its star strikers, Mo Salah and Roberto Firmino, few had given Liverpool even a glimmer of hope.
But at Anfield, and especially in Europe, never count Liverpool out. Somehow, Jurgen Klopp’s team conjured up four goals to win the semifinal 4-3 on aggregate.
As they attempted to take on board the enormity of their achievement, a succession of players uttered the word “unbelievable.” Klopp used a different word: “overwhelming,” he told BT Sport.

For Liverpool to qualify for the Champions League final, it would have to eclipse every great European night Anfield had ever seen.
Liverpool fans have seen their fair share of improbable European comebacks to know that Tuesday’s second leg against Barcelona wasn’t entirely a lost cause.
There is the 2004 victory over Olympiakos and Steven Gerrard’s half volley, the 4-3 win over Borussia Dortmund in 2016 and Dejan Lovren’s header.
There is something in the air at Anfield that offers hope in even the bleakest of situations.
Once the compulsory rendition of “You’ll Never Walk Alone” had been belted out before kick-off, it would have taken somebody brave to tell those 50,000 Liverpool fans this tie was already over. 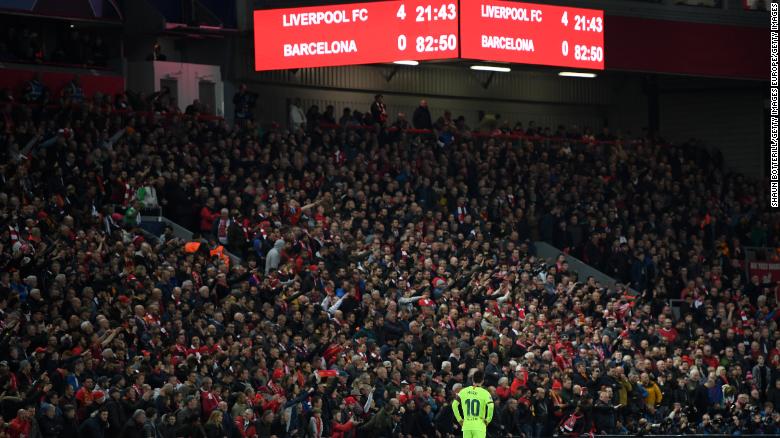 Lionel Messi was powerless to stop the Liverpool onslaught.
There was emotion and electricity in the air and Barcelona would have been desperate to weather any early storms and prevent the memories of last year’s nightmare quarterfinal against Roma to start flooding back.
Having earned a 4-1 lead at the Camp Nou, Barcelona traveled to the Italian capital with one foot already in the semifinals. But an early Edin Dzeko goal set the Catalan nerves jangling, before a second-half capitulation completed the most unlikely of comebacks for Roma.
As predicted, and as was required, Liverpool began at a blistering pace as their makeshift front three of Sadio Mane, Divock Origi and Xherdan Shaqiri hassled Barcelona’s backline with the support of Jordan Henderson from midfield.
It became immediately obvious that Jurgen Klopp’s favored high press might yield success, as first Clement Lenglet and then Sergi Roberto gave the ball away under pressure.
That Liverpool played well at the Camp Nou a week ago, despite the first-leg result, will have no doubt given the team and fans a glimmer of hope.
Three gilt-edged opportunities squandered by Liverpool and another Lionel Messi masterclass perhaps gave the scoreline more gloss than Barcelona deserved.
READ: Mo Salah r

The men in red started as though they genuinely believed they had a chance and it took just seven minutes for them to force a Barcelona error and light the touch paper at Anfield.
Joel Matip’s wayward long ball was intercepted by Jordi Alba but the left back’s weak header, intended for Lenglet, found only the feet of Mane. 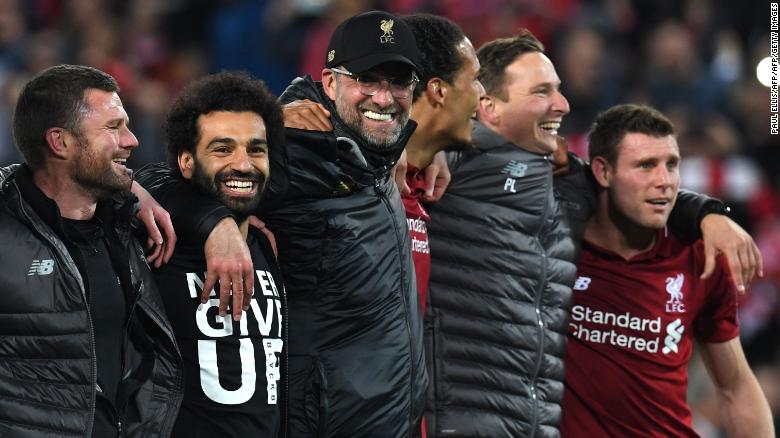 Mohamed Salah and Jurgen Klopp take in the adulation of the fans.
The Senegal forward exchanged passes with Henderson, who showed impressive poise to dance his way through a crowded penalty area and force a save from Marc-André ter Stegen, but Origi was on hand to tap home the rebound.
While it was certainly uncharacteristic of Barcelona’s usually composed backline to give away an opening goal, the magician at the other end was causing Liverpool problems at regular intervals.
With his first meaningful touch of the ball, Messi went on a powerful run, shrugging off Fabinho and laying a precise pass into Philippe Coutinho.
In front of the Kop, the fans who as recently as last season would celebrate his goals, Coutinho struck a weak shot to allow Alisson to palm the ball away.
Messi would go on to have three efforts on goal of his own, the first forcing Alisson into a smart save before two wicked, low drives had the Brazilian scrambling across his line.
Halftime would have come as a welcome break for both sides, though the omens — if you believe in them — were looking good for Liverpool. Or rather, bad for Barcelona.
At half time in the second leg against Roma, Ernesto Valverde’s side also trailed 1-0.
Liverpool couldn’t, could they?

An enforced halftime substitution, Georginio Wijnaldum for the injured Andy Robertson, initially looked as though it would unsettle the home side.
Instead, it unexpectedly turned this tie on its head. 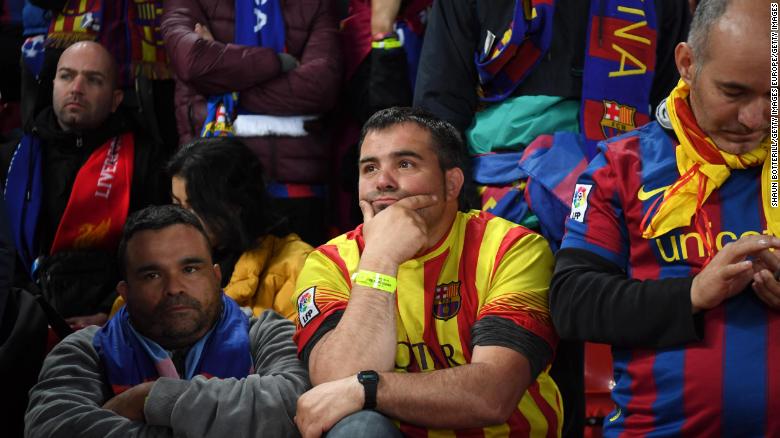 Barcelona fans could scarcely believe what they were witnessing.
Within 10 minutes of the second half starting, in what felt like the blink of an eye, Liverpool found itself level in the tie for the first time since the 26th minute of the first leg.
Trent Alexander-Arnold’s low cross was deflected into the path of Wijnaldum, whose low shot squirmed through the Ter Stegen’s arms and into the net.
Now Anfield was rocking and really starting to believe.
Then, just two minutes and two seconds later, just 31 seconds after Barcelona had restarted, Liverpool had another.
It was Wijnaldum again, this time popping up at the near post and guiding Shaqiri’s cross into the top corner with his head.
For the first time in the game, the frenetic pace of the match slowed as Liverpool naturally sank back towards its penalty area and Barcelona pressed forward.
But with 10 minutes to go, a moment of genius from Alexander-Arnold unlocked the Barcelona defense for a fourth and final time.
The 20-year-old walked away from the corner kick as if conceding the set piece to Shaqiri, only to spot Origi unmarked at the near post.
Ter Stegen was still trying to organize his defenders by the time Alexander-Arnold’s low cross had made contact with Origi’s foot.
By the time he had realized what was happening, it was too late. The ball was in the back of the net and Liverpool were 4-0 ahead. 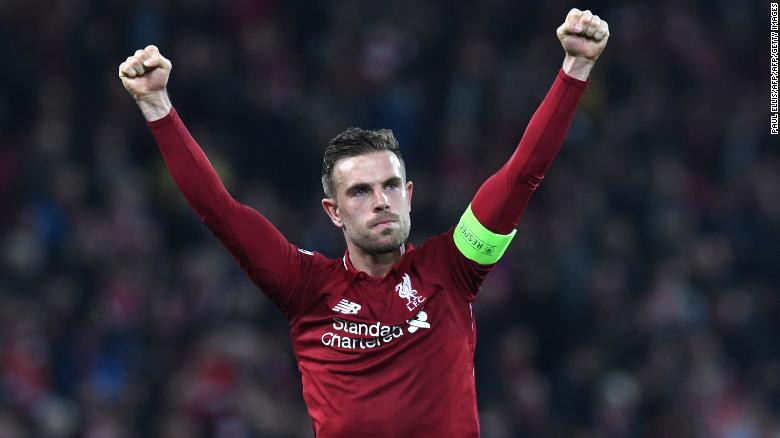 Liverpool captain Jordan Henderson fought back tears at the final whistle.
Even for Liverpool this comeback was beyond comprehension. Mane was interviewed pitchside after the game, but could not find the words to explain what had just happened.
Henderson, his captain, came over and fared little better. He puffed his cheeks out, held his hands on his head and had tears in his eyes.
And he wasn’t alone. As the camera panned across Liverpool’s playing squad and backroom staff, all linked by the arms and being serenaded by the Kop, James Milner struggled to fight back the tears.
Anfield had seen a lot, but it had never seen anything quite like this.
Show More
Share
Facebook Twitter Google+ LinkedIn StumbleUpon Tumblr Pinterest Reddit VKontakte Odnoklassniki Pocket WhatsApp Viber Share via Email Print

Victim in attack outside bar relieved that ex-Chicago cop charged seven months later: 'I still think about it every day'

Dale Steyn excited to get going in PSL 2020

Pakistan sees PSL as a platform to bid for ICC event